The greyhound racing industry in the Republic of Ireland is regulated and promoted by the commercial semi-state body the Irish Greyhound Board (IGB). There are currently 16 IGB licensed greyhound racing tracks in the country. As of the end of 2015, there were 3,351 greyhounds in the pool of racing dogs.1

In the Republic of Ireland the greyhound racing industry receives government funding through the Horse and Greyhound Racing Fund. Between 2001 through 2019 more than €250 million will have been paid out to the IGB from this Fund.2

The majority of greyhounds racing in Ireland are bred in the country. In 2019, there were 2,324 litters registered in the Irish Greyhound Stud Book, a decrease of 23% since 2010.3 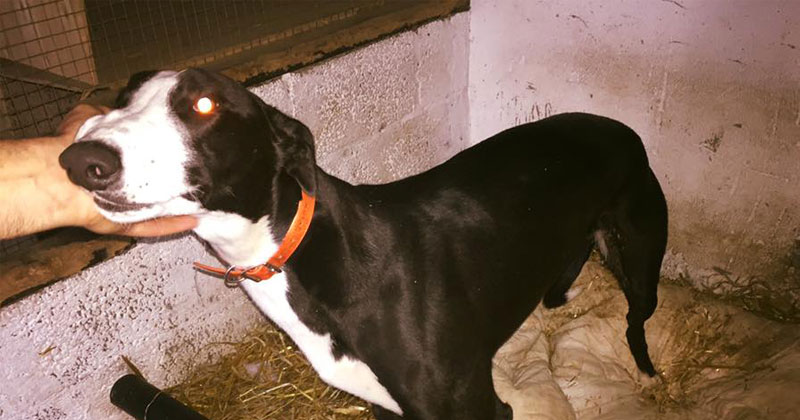 A greyhound at an Irish kennel in Donegal. (Burma Kennels) 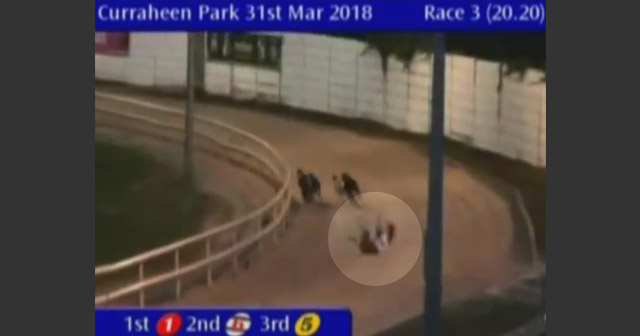 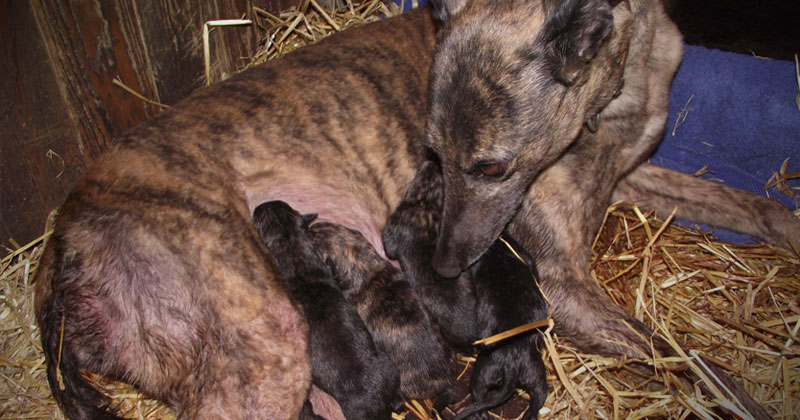 A greyhound with her puppies at a breeding kennel in Ireland. (Jaxx Greyhound Kennel) 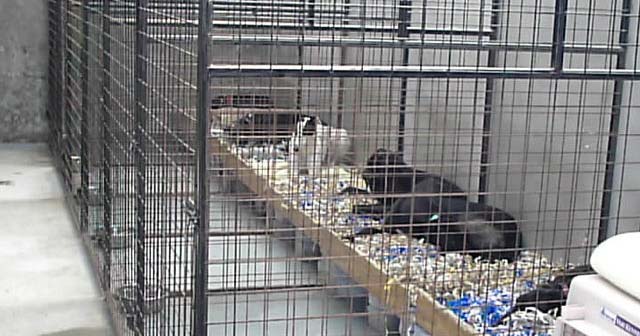 Caged dogs at a greyhound kennel in Ireland. (Greyhound-Data) 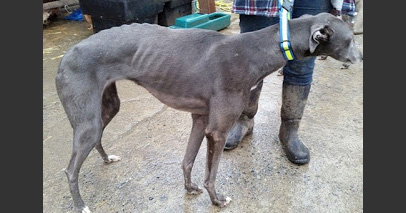 Emily the greyhound was a former racer found abused and abandoned. (The Irish Sun) 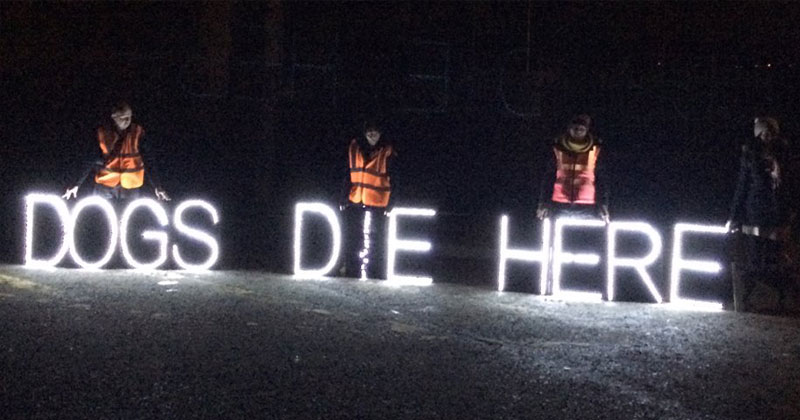 Protesters against greyhound racing at the Curraheen track in Ireland. (Ban Blood Sports) 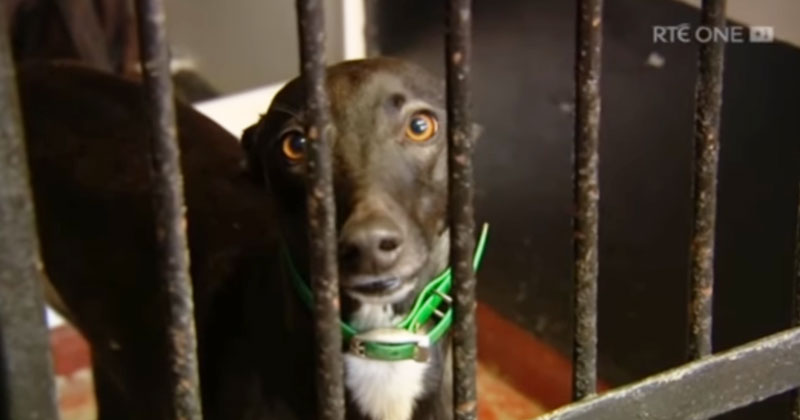 A caged dog from the RTÉ exposé Greyhounds Running for Their Lives. (RTÉ News) 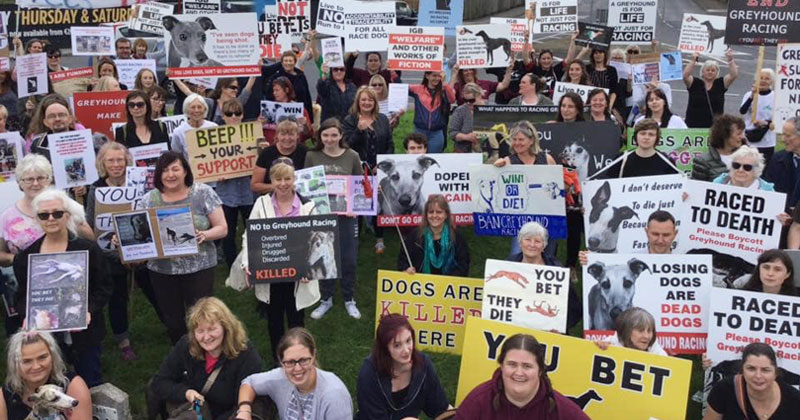 The IGB has Racing Regulations that include rules for betting and prize money, doping policies and requirements for racing officials.4 Additionally, the Irish government passed the Welfare of Greyhounds Act in 2011 that sets standards for certain greyhound breeding operations and general welfare requirements for housing, transport and record keeping.5

Wagering on greyhound racing is legal in Ireland. In 2019 the turnover, or amount bet by gamblers, at the IGB licensed tracks was €23 million.7 Since 2010, the turnover has declined by 30%.8

On June 26, 2019, RTÉ News aired a program entitled RTÉ Investigates: Greyhounds Running For Their Lives. The investigation revealed that nearly 6,000 Irish greyhounds are killed each year.9 In addition, according to an IGB-commissioned report that was completed in 2017, the Irish greyhound industry breeds 1,000% more puppies than it needs to conduct racing.10 The program also highlighted the merciless killing of unwanted greyhounds at Irish knackeries or slaughterhouses, drugging dogs to fix races, track injuries and deaths.11 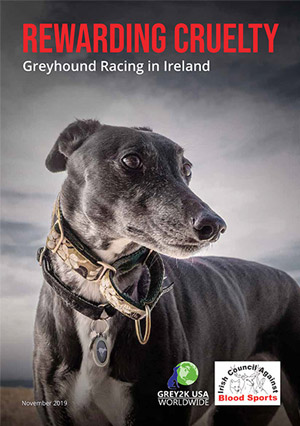 Learn about the cruelty and corruption of dog racing in the Emerald Isle in our groundbreaking report.

You may read this report online or for a donation of $10, we will send an official copy right to you.

Order a copy of Rewarding Cruelty >>


Learn more about dog racing in other countries 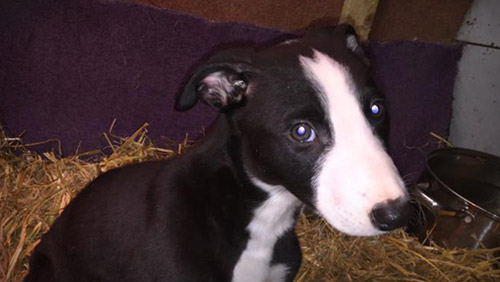 Sign our petition to end dog racing in Ireland >

Irish Examiner - Greyhound board declines to release attendance figures due to

Let your kindness live on

Meet our new team and get neat stuff!

A word from Mark Twain

Dublin Rally for the Greyhounds 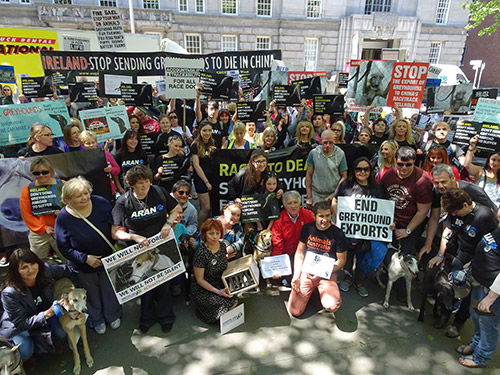 On June 2, 2016, hundreds of people opposed to the export of Irish greyhounds came together for a rally for the dogs. Greyhound advocates and adoption leaders from Australia, Italy, Macau, United Kingdom and the United States assembled with John Carmody and ARAN (Animal Rights Action Network) outside the Dept. of Agriculture, where GREY2K USA delivered our petition with over 300,000 signatures to Agriculture Minister Michael Creed. The rally ended with a march to the doors of Parliament and a meeting with lawmakers.

“The dogs have become a commodity. They spend most of their time confined, apart from a little bit of exercise …it is a miserable life.”

Ireland Society for the Prevention of Cruelty to Animals